Holiday joy and a new pic from Drew 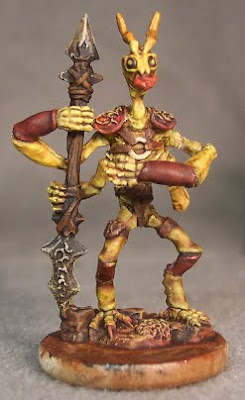 Taking a holiday break from my Traveller stuff. I've been working with the First Born Gaming guys on their playtesting of Brink of Battle. So I've been refocused on the game for now.

I have decided to put a hold on the Traveller minis for now. I will be running a game of it soon, and also need to put my renaissance buildings together, clean my basement, and paint up said buildings.

Here's a new pic of a Reaper Mantis Man painted by my friend Drew. Enjoy!
Posted by Faust23 at 7:15 PM No comments:

Sword of the Imperium! 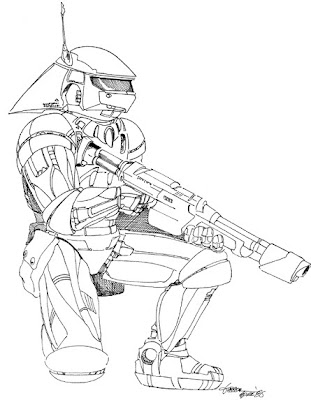 Continuing with my current Traveller RPG fixation, I just got a pdf copy of The Spinward Marches Campaign by Marc Miller. I owned it back in the day, and gave it away when I was "done with roleplaying" (yes, I was a dumb shit).

My all time favorite depiction of Imperial Battledress powered combat armor was the one above that is in that supplement. This is what I'd tried to approximate with the Nova Corp Reaper mini conversions you've seen here.

One day, I will commission a top line sculptor to make me a whole squad that looks 'right'. But for now, my conversions will have to suffice.

I ran a MegaTraveller one shot game with the boys on Monday night. We had a blast, and I have been convinced I should run Traveller as one of our alternate games to D&D.

Maybe the party will run into Jagger Kilmane, Sword Worlder Kapiten of the Father of Sorrows
Patrol Cruiser....

If so, he'd look like a late forties version of Vladimir Kulich as seen here: 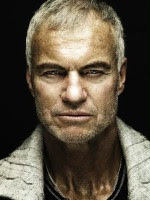