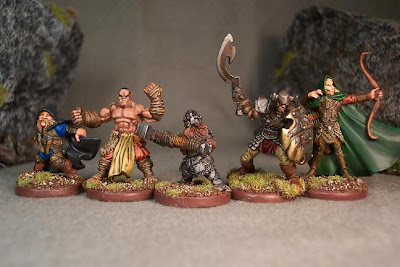 Finally, I present the figures we use for our D&D 4th Edition game. Drew is the DM and we have been having a great time taking out bad guys and building our rep as the Raven Guard. So named because we put so many baddies to death that the Raven Queen smiles on us.

First up is Angvar, Son of Tollec. He is a half-elf Ranger who provides the Raven Guard with serious archery support. His people were enslaved by Dark Elves from the Underdark. Now he's on the road looking to purge the world of such evil, and doing a fine job of it. 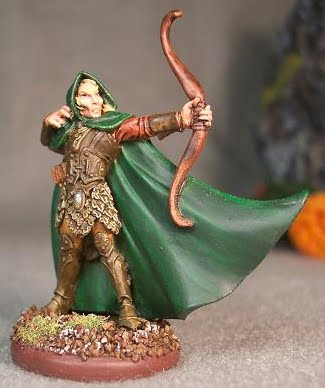 Next up is Beam, our dwarven cleric of the Raven Queen. He used to serve Bahamut, but through an act of his own cowardice, shunned the Platinum Dragon and turned to the Raven Queen's service. Now Beam provides wicked heals to his team of expert killers. 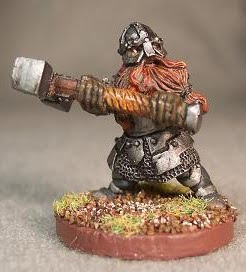 Jagger Kilmane, Father of Sorrows used to lead a strike team called the Growling Griffons. On their last mission, they were ambushed, captured by Mind Flayers, and Jagger became a thrall to the leader of the Illithid cabal. His evil master put him in the gladiatorial arena of the Underdark where he gained the moniker 'Father of Sorrows'. Now Jagger is the frontline that forms the Raven Guard's advance. Jagger is a half-orc fighter. 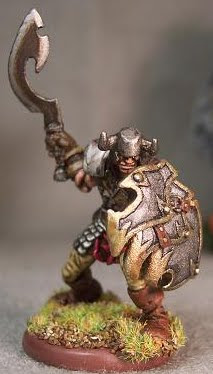 Jotan Silverhammer is the Raven Guard's elite forward recon specialist. He is a Dwarf Rogue who finds the fastest way to the jugular of a foe, whether with his magic axe or a wheel dart. 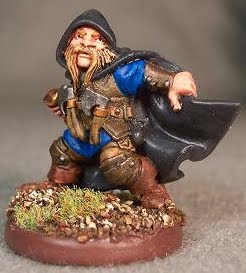 And finally, we have Quan-Bai, the Battleworn Apostate. Quan-Bai is a half-orc monk who turned to the mastery of psionic combat training to defeat his foes. He provides the Raven Guard with additional combat control and quiet insight. 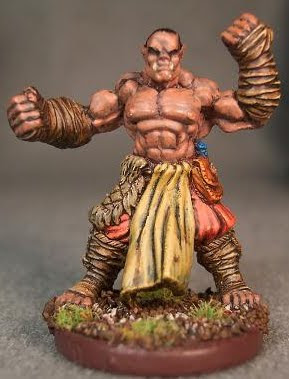 All figures are from Reaper.

Pics on the way

I have a lot of stuff I painted before my numb arm issues. Gonna photo them and post 'em sometime today.

So I have a cluster of muscles in my right shoulder that are so totally knotted up that they are causing my entire right arm & hand to go numb.

This has been getting progressively worse over the past few months, and has pretty well shut down my miniatures painting and my drumming.

However, we've (my physical therapist, chiropractor, & massage therapist) have figured out the problem, and are now starting work on it.

However, I did paint up a bunch of stuff over the latter part of last year, and will post pics probably by this weekend.