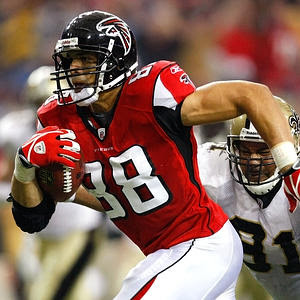 Some of you may remember that I got into NFL football last year. It was at my 41st birthday party that I told my friend Cam that I would finally give football a shot.

I have been an Emperor Geek* for many years, and was reaching a point in life where I was ready to explore something new. After some study that had less to do with statistics and more to do with personal connections, I chose the Atlanta Falcons.

Babydoll & I had just finished watching the first season of Spartacus: Blood & Sand, and I was all jazzed up for Gladiators, when the season started. My Falcons went on to have one of their best seasons in franchise history at 13-3. They choked in the playoffs and Green Bay went right through them. :(
This year they have been extremely inconsistent. Tony Gonzalez, our Hall of Fame destined Tight End has become my favorite player on the team. He's smart, good looking, and incredibly athletic. Which got me thinking about my favorite Half-orc D&D character, Jagger Kilmane, Father of Sorrows. He's kinda smart, kinda good looking, and incredibly athletic. If Jagger played football, he'd look like Tony Gonzalez! At least in the dark labyrinth of my mind he would.

Now, if Tony could cross the gridiron with two +2 Khopesh swords cutting a bloody swath to the end zone, I would be in geekery heaven.

I know you've heard this before, but we're precipitously close to getting Brink of Battle out the door and into your hot little hands. Or cold biggish hands, whichever is accurate. Alan & Gib are getting the diagrams finished, I'm setting up the distribution channels, and getting the web element positioned.

Dust off your minis boys, because unless I miss my guess, we're in for a wild night!

Noch Weiter!
*Emperor Geek - A comic and gamer geek who holds down a good paying, full time job, is laid frequently by someone other than himself, and who has good hygeine.